On Memorial Day we honor those who sacrificed for their country. I have always been proud that my father worked to rehabilitate the wounded warriors during WWII as part of a new program, introduced in 1943. This program utilized athletes and coaches from across the country.

My father played baseball and basketball in high school, helped coach the local teams and played semi-pro baseball before the war started.

He considered himself fortunate to be selected as part of this rehab program. His letters to my mother reflect his sense of honor at being among the many talented athletes. 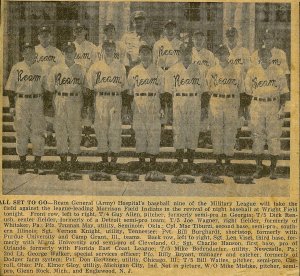 While going through some old papers that my mother carefully packed away in a small wooden chest, I came across a newspaper article dated October 13, 1943, she clipped from the Rockford, Illinois, newspaper. This article, by Pvt. Howard Martin, explains the rehabilitation program better than I could, so I have transcribed it here. I hope you find it as interesting as I have.

One hundred nineteen picked men, combed from the nine service commands, are hard at work at Camp Grant under a new physical education rehabilitation program designed by the surgeon general to recondition convalescents in hospitals in the United States and in combat zones. The school, now functioning under the direction of Capt. Everett C. Hogan at Company D of the 32nd battalion, is the first established by the army.

All soldiers selected for the eight-week course were former athletes, college and high school coaches and experts in teaching physical education in civilian life. The men, prominent in baseball, football and basketball, have plunged into their new duties and with a zest that is the marvel of Lt. Karl Gertenhouse, appointed by Capt. Hogan to be in charge of the detachment for classes and duties. His assistant is Lt. John Fitzgerald.

Upon reporting to Camp Grant the prospective phys-eds received a 10-day refresher course reviewing group exercises and physical education conditioning subjects as prescribed by the surgeon general. Maj. C. H. Barton, of the surgeon general’s office, conducted this class and the men then moved to Company D to begin learning their  new duties under the physical education rehabilitation program.

As outlined by Lt. Gertenhouse, the rehabilitation program is divided into four groups:

1 – Getting convalescent soldiers back to duty with mass drills and competitive sports designed to restore the will to win.

2 – Ambulatory cases who have been on their feet for some time will be given body building and breathing exercises and such games as softball, medicine ball, volley ball and tumbling.

3 – Ambulatory cases still requiring treatment will be led in moderate arm and shoulder exercises and participate in light games.

Under the rehabilitation program the instructors must be able to lead classes, give correct demonstrations and determine which type of reconditioning fits the convalescent soldier.

Puts In A Strenuous Day

The phys-ed trainees – many are non-commissioned officers – have a busy day that begins with calisthenics at 7:30 a.m. From 8 to 9 there is close order drill with each man learning to give commands. This is followed by a period of college anatomy and physiology. Special service duties and hospital management are studied for the next hour and at 11 there is more drill and tests in ensuing commands.

Afternoons are devoted to hikes of 7 to 12 miles twice a week, four hours on the obstacle course once a week and two to four hours in the commando gymnasium learning judo, tumbling and physical exercises. And when there is time, the group engages in competitive games.

The physical part of the program is directed by Master Sgt. Melvin L’Dell, who teaches jiu jitsu and commando  fighting, and Staff Sgt. J. P. Leverett, commando group exercise instructor, who makes things look easy in his demonstrations, which, when put into practice by his willing pupils, cause involuntary groans and creaking of bones and muscles.

Among the better known athletes receiving instruction under the phys-ed rehabilitation program are Euel Moore, who pitched for the New York Giants in 1935; Heinie Mueller, late of the Philadelphia Phils; Carvel Rowell, star of the Boston Braves and Milt Trost, the former Marquette University and Chicago Bear football tackle.