The picturesque Stones River winds its way through Rutherford County, Tennessee, on its way to Percy Priest Lake and eventually to the Cumberland River. Along its shores the Stones River National Battlefield spans a small parcel of the land where Confederate and Union forces fought December 31, 1862, through January 2, 1863. Caught amid the urban sprawl of modern-day Murfreesboro, the site marks one of many battles, in what was then considered the “west,” that allowed the Union forces to split the Confederacy.

On a recent trip to Tennessee, our son took us to the Stones River National Battlefield.  I’ve visited many Civil War battlefields over the years but this was my first time at Stones River.  At the visitors center we learned about the battle and then we took a driving tour. My husband and I are both history buffs and we have a particular affinity for the Civil War. Both of us have ancestors who fought for the Confederacy and we both grew up with the many Civil War sites nearby.  Seeing the terrain and hearing the story of the Battle of Stones River gave us an understanding of what the men who fought here went through one hundred and fifty years ago.

At the beginning of the war, Tennessee seceded while Kentucky did not. This drew the initial lines in the “west.”  By mid-1862 most of the Mississippi was lost and Union ships blockaded the southern and eastern ports. Union strategists planned to cut a wedge through Tennessee and Georgia to divide the Confederacy. Although widespread, the road network of the day would not sustain transport of supplies, munitions and men. Railroads and riverboats provided the fastest and easiest means of transport. So the Union generals were ordered to capture the railroads and take control of the rivers.

The spring of 1862 saw the fall of Fort Donelson and Nashville, both on the Cumberland River. On the night of December 30th General William Rosecrans left Nashville and marched his men southeast along the Nashville Pike, which paralleled the Nashville & Chattanooga Railroad. They camped just outside Murfreesboro where the enemy waited. Anticipating the coming fight, Confederate forces under General Braxton Bragg attacked on the freezing-cold morning of December 31st. From the south they pushed  the Union troops back toward Nashville Pike, the railroad and the Stones River.  The battle raged across cotton fields, through stoney outcroppings and cedar thickets for three long days. Thousands on both sides were killed, wounded or captured.  (13,249 Union, 10,266 Confederate)

On January 2, 1862, after having pushed the northern troops off a hill and across the Stones River, Union artillery on the far side of the small river fired on pursuing Confederates, killing or wounding nearly 1,800 in mere minutes. The southerners retreated as the Yankees recrossed the river and retook the high ground.  The following day General Bragg withdrew his men from the battlefield and from Murfreesboro.

In the months following the battle, General Rosecrans built a large fort at Murfreesboro called “Fortress Rosecrans.” This 200 acre, earthen-works fort became the supply depot for the later campaigns against the rail center  in Chattanooga and eventually Atlanta.

In 1863, not long after the battle, Colonel William Hazen’s men built a monument to commemorate the Union soldiers lost in the battle. It is the oldest intact Civil War memorial.

In 1866, over 6,100 Union soldiers were reburied in the Stones River National Cemetery.  In 1867 remains of Confederate soldiers were moved to a cemetery south of Murfreesboro. Later, in the 1890’s, about 2,000 southerners were moved again to Evergreen Cemetery in Murfreesboro. As at many other battlefields, the U.S. government established cemeteries for the Union soldiers who died, but private citizens provided for the interment of the Confederate dead.

The Stones River battlefield became a tourist attraction bringing people and needed money to the area. Situated along the railroad, the Nashville, Chattanooga & St. Louis Railway provided excursions for those who wanted to see the cemetery, memorials and the battlefield  itself. The railway published a book called “Southern Battlefields” in 1890 to serve as a guidebook for those touring the many battlefields. Later, in 1906, the railroad built the artillery monument, a 34-ft-tall obelisk marking the hill where the last attack took place so that the passengers could see it from their train.

Modern day tourists can explore the preserved portion of the battlefield and the surrounding area. With the help of maps and information provided at the visitor center, tourists can maneuver through homes and business areas to find the Hazen Brigade Memorial, the remnants of “Fortress Rosecrans” and to explore the Stones River.

Was my great-grandmother a real estate mogul? Not likely. But she did buy and sell real estate at a time when women were supposed to stay home, keep house and raise children. We’ve found her name on several deeds, from 1892 to 1914, some in prime locations in the downtown district of the thriving community. She passed on her real estate savvy to her son, my grandfather, who invested in several land parcels. Disposing of his real estate sent me on a search where I found more than deeds.

Old deeds can provide another tool for genealogical research. Although they are not likely to be available on the internet, if you are willing to search through courthouse records, they can provide a valuable resource in learning about your ancestors. Which is what I have done, not for the sole purpose of genealogy, but for the purpose of settling an old estate.

It might seem incredible to some but my grandfather’s estate, at least the real estate portion of it, has never been settled. Not so bad you say, except he died in 1921. Yes, that’s ninety-one years ago. He left a widow and nine children, including my four-year-old mother. All the children are gone now, so it is up to the grandchildren to settle his estate. With so many heirs, the property must be sold and the proceeds divided up. After the lawyers take their share, no one will get much, but my hope is to get it settled before the hundred-year mark.

Before selling real estate you must have the deed. The task of locating these documents has proved to be difficult. Although my family paid the real estate taxes all these many years, when the lawyers searched for the deeds they couldn’t find them all. Or rather, they couldn’t match the deeds they found with the property. So my dear brother and his wife went to the courthouse and scanned every deed they could find that might be related to our family. Scanning them was an enormous task. Reading them and making sense of them proved to be something entirely different. 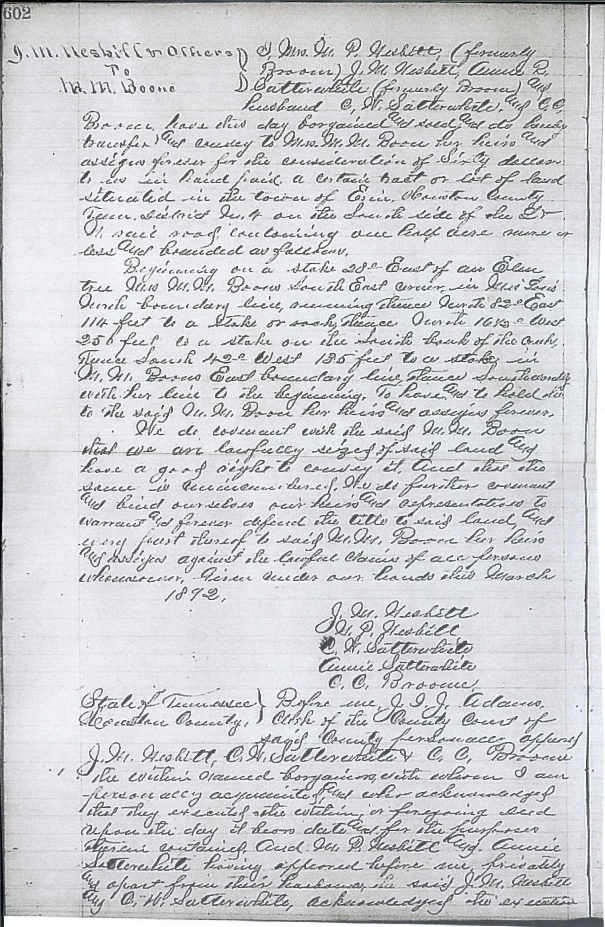 Have you ever read a hand written deed from before 1900? If not, it is an experience you should try at least once – if you have the patience. Needless to say, I volunteered for the job.  I had deciphered some old deeds from the 1800’s passed down in my husband’s family so I didn’t go into it entirely blind. I’ve also spent time on Ancestry.com reading census records and other handwritten documents. So I used those experiences as a guide. I knew the people involved, at least I knew their names from our genealogical records. Finally, I knew the location of the property. I grew up in the small town and my mother made a point of showing us the property when we were younger.

The deeds I looked at were dated as early as 1871 and as late as the 1950’s. The ones prior to the 1920’s were hand-written. The old descriptions might refer to an “oak tree” or a “tree stump” that is long gone and usually list adjoining property owners who years ago sold their land. The people involved are no longer living. Roads have been moved or widened or re-named or no longer exist. So it has been quite a challenge.

The silver-lining to all this work has been the insight I gained about my Great-grandmother Boone. My mother and grandmother rarely spoke of the woman although she lived near them and was obviously a part of their lives. I got the impression from my grandmother that Great-grandmother Boone was the stereo-typical mother-in-law, always critical. Perhaps that came from her own difficult life.

At age 23 she was left a widow with two small children. Both her husband and father-in-law died during a cholera epidemic in 1873. I don’t know how she survived in the ensuing years. I do know that over time she became a business woman. She managed to send her son to Edgewood Academy,  a prominent boarding school in the area. And she invested in real estate.

By 1900, census records tell us she owned her home, free of mortgage, and she took in boarders. Both the 1910 and 1920 censuses show that she ran a hotel, which she rented, and she had employees. According to family lore, she and her daughter ran the hotel for the railroad. It sat facing the railroad tracks across the street from the train station. She purchased a lot on Market Street (the main drag) in 1914 which became the location of the Central Hotel when the building was moved in 1921.

In the early 20th century, Erin was a thriving railroad town where twenty or more trains came through each day because it was the shortest route from Nashville to Memphis. The high ridge west of town meant each west-bound locomotive needed the help of a hill engine to get it to the top of the hill. The train would stop in Erin so that the additional engine could be hooked up. A turn-around track enabled the hill engine to reverse directions both in town and atop the ridge.  Over time the railroad decided that a longer route was more economical than utilizing the hill engine so traffic declined. But during the railroad’s heyday, my great-grandmother’s hotel would have been a thriving business.

When her daughter-in-law died in 1911 leaving six small children, my great-grandmother refused to raise her son’s children. She was 61 and running her own business. My other, and younger, great-grandmother and great-grandfather moved in with my grandfather and took over the day-to-day responsibilities of running the household and caring for the children. Comments in later years from one of my aunts conveyed my grandfather’s disappointment in his mother. Family resentment carried down through the generations.

As a career woman and grandmother myself, I have some understanding of my great-grandmother’s viewpoint. She had raised her children to adulthood alone. She had moved on to become a business woman active in her church and community. At her age taking on the responsibility of caring for a baby, a toddler, pre-schoolers and school children must have seemed an insurmountable task and a drastic change to her lifestyle. So I can sympathize with her decision. She didn’t abandon the family. She was nearby to provide support and guidance. As the children grew older she let them work at the hotel, she set a high standard for her grandchildren’s behavior, and, I’m sure, she contributed financially to their support.

Yes, my great-grandmother Boone was a strong, independent woman well ahead of her time. And I’m pleased to have learned more about her and her many real estate transactions.