With Thanksgiving only a few days away, many of us are planning our menus. An important part of the annual feast is the dessert and that means pies. Pumpkin pie, as well as apple, pecan, and even mince meat, are absolutely essential for the meal to be complete. So have any of you ever wondered how the homemaker managed to provide those pies for their World War II Thanksgiving table without using sugar? 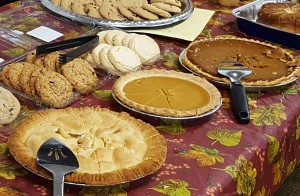 No, the Thanksgiving celebration was not cancelled due to the war. It continued both at home and overseas, but with rationing of many food stuffs, it became more difficult to plan the menu. Desserts were especially hard because of sugar rationing, which continued even after the war ended. Cooks had to get creative. They often substituted honey and molasses for sugar. In my novel, Kitty’s War, Kitty’s mother made pies for her boarding house tenants using honey. In my story the family bee hives insured a steady supply of the sweet substance. The inspiration for this detail came from a family story about my grandfather keeping bees.

Since apples were in abundant supply in the early 1940’s, the government suggested apple pies for Thanksgiving. The Louisville Times published a recipe for apple pie using honey. Sure sounds good.

The Office of Price Administration put out a documentary film explaining the need for sugar rationing. I had no idea that sugar was used in so many ways during the war. Watch the video for an education on life during World War II and how our elders dealt with sugar rationing. 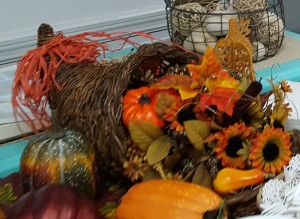 One thought on “Thanksgiving and Sugar Rationing during World War II”