Through the COVID pandemic I’ve been reading – a lot. Two books I read were memoirs by WWII flyboys. I thoroughly enjoyed both. They were “From Farm to Flight to Faith” by Bernard O. DeVore and “A Measure of Life” by Herman L. Cranman.

Bernard O. DeVore served as the Flight Engineer on the Picadilly Special, a B-17 Flying Fortress. He flew out of Paddington, England, as part of the 325th Squadron, 92nd Bomb Group, 8th Air Force. For those who have read my previous posts, there were two WWII veterans in my hometown who were also part of the 92nd Bomb Group and flew out of Podington, Tom Brewer and Everett Holly. 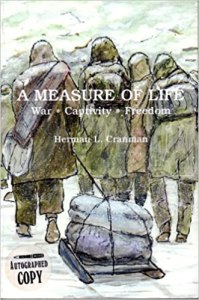 Herman L. Cranman served as Bombardier on a Consolidated B-24. He flew with the 376th Bomb Group, part of the 47th Bomb Wing of the 15th Air Force, near San Pancrazio, Italy. After being established in Tunisia in 1943, the 15th Air Force moved into Italy as the Allies advanced from Sicily onto the Italian peninsula.

The two memoirs are very different yet have much in common. Both men wrote about their service later in life. While DeVore kept his story shorter yet consise, Cranman provides lots of details in a much longer book.

As I mentioned DeVore flew in a B-17 bomber while Cranman flew in a B-24. DeVore, as part of the 8th Air Force flew in the same airplane, the Picadilly Special, with the same crew for all his missions. The 15th Air Force, for which Cranman flew, rotated the men between whatever aircraft was available for each mission. Their crews were also not necessarily the same on each flight.

Another important difference between the two stories was that DeVore completed his thirty missions and returned safely to the United States in early 1945. Cranman’s aircraft was shot down over Hungary on July 14, 1944, and he spent the remainder of the war as a Prisoner of War.

Both memoirs included the story of how they met and “courted” the love of their lives. These stories were my favorite parts. DeVore met his love when he and a buddy picked up two girls on the way to the beach near Tampa, Florida, while he was in training. They married before he went overseas. Cranman realized that a girl he’d known since childhood had stolen his heart before she moved away. All through the war and his incarceration he worried that she didn’t love him like he loved her. When he finally got home he discovered that his parents had arranged their engagement on his behalf. So they were married soon after the war.

Do you see why I love reading memoirs? Every one is different, yet so interesting. I highly recommend both these books.

When asked where I get my ideas for WWII love stories, I usually say that it started with stories told by my parents and other family members. From there my research has included lots of books, magazine articles, shows on TV, and even old movies. One of the best ways I have found to get into the period is to read memoirs. These personal accounts open a window into the life of an individual – telling his or her unique story. The Second World War affected every person living at the time. Some were drastically changed. Some went to places they had never even imagined. Others stayed home and watched their familiar world change around them. Every reference in later years was either “before the war” or “after the war.”

In researching my current novel-in-progress, I immersed myself in the mindset of the WWII soldier by reading memoirs of men who had similar experiences as my fictional character. After reading many memoirs as well as historical accounts, I have found that memoirs provide more insight into the personal experiences – from their daily activities to what they knew and felt about the war. Letters and journals written at the time convey the emotional state of the soldier. And they record the minor details of life, fertile soil for the fiction writer who wants to transport the reader into the world of WWII.

Since I had already decided that my hero served in the First Infantry Division and was wounded soon after D-Day, I searched through the many memoirs available online for someone who served in the First in the early part of the war. I discovered “Letters from a Solider” by William M. Kays. The well-written account provides letters and pictures pulled together by the author’s vivid memories of the events, the people and the locations.

Bill Kays entered the Army as a Second Lieutenant after graduating from Stanford where he went through the Reserve Officer Training Corp (ROTC). Both his letters and his recollections of his early experiences in the Army convey just how ill-prepared the United States was for war. Many of the young officers came straight from college where their military training varied greatly. Others had gone through the Army’s Officer Training Schools (OCS) which were necessarily brief. Kays makes no bones about how incompetent he felt as he boarded the overcrowded Queen Elizabeth for England on August 30, 1942, only two short months after his induction. Once in England Kays was assigned to the First Infantry Division, which was already in England.  Despite the fact that he had no training in combat engineering, Kays became an officer in the 1st Engineering Battalion.

In “Letters from a Soldier” Kays provides a vivid account of training at Fort Leonard Wood, Missouri, of the voyage to England, and of his stay in England and Scotland before shipping out to North Africa. As a writer, his accounts gave me insight about how officers and enlisted men were trained and assigned to various units. In Kays case, he later figured out that in an attempt to get away from Fort Leonard Wood, where he was miserable, he had volunteered for overseas duty. So instead of getting him into another school for training, he landed on the fast track to overseas and combat.

Since I had read very little about the campaign in North Africa or the invasion of Sicily, Bill Kays’ book provided the background I wanted for my character. My story will pick up much later after the soldier is wounded, but I needed a back story. From Kays’ account I can piece together what my character experienced early in the war and how those experiences influenced him later.

The memoir provided details like how long it took for letters to get to the soldiers at various times and locations and that the soldier had to make a request in his letters so that civilians could send him packages for things as simple as cookies or wool socks. The letters also show how his concerns and interests changed over time with interest in what was going on back home dwindling. Vivid accounts of the weather, food, or lack thereof, and living conditions put the reader alongside the soldier. For instance, he gave descriptions of how mud infiltrated everything (yes, even in North Africa, it rains) or how they traded with the locals for eggs to supplement their bland diets.

Kays describes the invasion of Sicily as he watched it from shipboard since his regiment was held in reserve and went ashore later. He tells of watching the naval guns shoot down planes carrying our own airborne soldiers, presumably due to lack of communication between the Navy and the Army Air Corp. One of the many foul-ups during the war, yet one I had not heard before.

Later, Kays gives one of the best accounts of the D-Day landing on Omaha Beach I have ever read. Through his vivid memories the reader experiences the day with him.  As a combat engineering officer assigned to the 16th Regiment, he knew that the beach defenses should have been destroyed before the infantry landed. When he saw them intact, he believed the landing would fail and that they would all be killed. Yet he stepped off that landing craft onto the beach and fought to survive. Little did he know that in the next year he would fight his way across Europe – and live to tell about it.

Other memoirs on my shelf include “Roll Me Over” by Raymond Gantter, “If You Survive” by George Wilson, “A Soldier’s Journal” by David Rothbart, “Visions from a Foxhole” by William A Foley, Jr., “Our War for the World” by Brendan Phibbs, and “One Man’s War” by Tommy LaMore.  All these deal with the war against the Germans.

The war against Japan constituted a whole different experience and, while it was fought largely by the Navy and Marines, many forget that the Army played a big role. My uncle and several others from our small town in Tennessee spent the war in the South Pacific in the Army fighting the Japanese. So ideas are swirling for more stories.