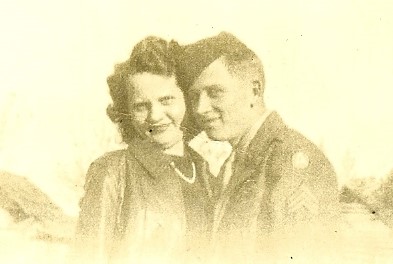 In the movie “The Holiday” (2006), Eli Wallach’s character explains to Kate Winslet’s character what a “meet cute” is in the movie business. “It’s how two characters meet in a movie,” he says. In other words, it is the scene where something brings the hero and heroine together and often the chemistry between the two is evident from the start.  In Romantic Comedies the writers try to make the meeting something awkward or unusual or “cute.”

The term isn’t used as often when referring to novels, but romance novels always have a scene where the hero and heroine meet. There is a “meet cute” scene even if it’s not “cute.”

When I hear how couples met during WWII, I imagine the “meet cute” scene. I go on to ask what brought them to this point in their lives and how did their relationship develop into lasting love. Many had challenges such as parental disapproval, religious differences, physical separation due to the military, differences in social status or simply their own uncertainties. These challenges create conflict within the love story. Yet the challenges are overcome.

In real life the initial meeting may not seem so dramatic. Yet to those involved, it was life changing. My in-laws met on a blind date and, incredibly, married twelve days later before he shipped out. I wrote a post about Frank Towers who met his wife-to-be at a church social held for soldiers far from home, a social he didn’t want to attend. I wrote in another post how Irving Grayson’s future wife saw him showing off his skills at a skating rink. All these are “meet cute’s.”

In my novel, Kitty’s War, the hero and heroine first meet when she pulls him from the surf and saves his life, which is less of a “meet cute” and more of a dramatic encounter. Their second meeting is the awkward, unsure moment we think of as a “meet cute.” 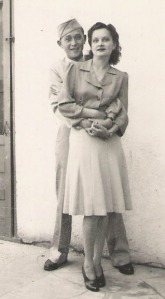 Of course, plenty of couples knew each other before the war started. Maybe they went to school together or lived in the same town. Even in these instances, the war accelerated their desire to get together and see where their mutual feelings took them.

What makes these meetings during WWII unique? Many couples would never have met if it hadn’t been for the war. Servicemen trained far from their homes in different places across the country before going overseas. Other men and women met while serving overseas in the military. Even defense plant workers moved from their home towns to cities where factories and shipyards had geared-up for wartime production. In these places far from home, lonely men and women found each other. And the war added an element of urgency to the romantic relationships.

“The Clock” (1945) with Judy Garland and Robert Walker is a good movie example with a “meet cute” in a train station. A soldier on 48 hour leave in New York City meets a girl in Pennsylvania Station. The two fall in love before he ships out.

The Second World War caused a great mixing in our population. Millions of men and women moved all around the country during the war. Most had never traveled very far from home.  They were exposed to different cultures, different scenery and different climates. My mother told of eating Italian food for the first time while renting rooms from an Italian family in Florida. My father-in-law saw the ocean for the first time when he sailed across the Atlantic to fight in Europe. Raised in New England, Frank Towers trained in the humid heat of Camp Blanding, Florida. They had so many unique experiences.

Veterans Day is the perfect time to read about the men and women who fought for our country during WWII, so…read my novel, Kitty’s War. If you’ve already read it, then write a review so that others will have the opportunity to read it, too. Find it on Amazon or on Barnes & Noble  or on Books-a-million or on iTunes/ibooks or on Kobo or on The Wild Rose Press where you can purchase it in ebook format or in print. You can also post a review on Goodreads. Thanks for your support.

Pre-order A War Apart On Amazon