The B-17 Ye Olde Pub was in Jacksonville last weekend. We didn’t get to ride this time but we went over to Craig Field to have a look. Our six-year-old grandson went with us and he had a ball.

The plane is owned by the Liberty Foundation. Along with the B-17, they also brought a P-51 fighter. We didn’t get to see the P-51 up close because it taxied away and took off on a far runway. The P-51 had its tail painted red to honor the Tuskegee Airmen or “Red Tails.” You can see the P-51 in the background of my picture in front of the B-17.

My grandson and I toured inside the old bird while my husband waited outside. We climbed into the nose through a tight passageway. Once inside the nose you can stand up and look out through the Plexiglas surrounding the bombardier’s seat. The navigator also sat in the nose at a make-shift desk where he plotted the course.  The hero in my novel, Kitty’s War, was the navigator on a B-17 similar to this one.

Back through the narrow passageway, on your knees or, like me, scooting on your behind, we climbed up into the area behind the pilots. In the picture you can see the numerous gauges and controls the pilots had to monitor. No wonder it took two to fly the bomber. The flight engineer stood behind the pilots and fired the top turret guns.

From there we walked across the narrow bridge through the bomb bay. My grandson loved this part. It was like walking the balance beam on his playground. I was busy taking pictures and pointing out the fake bombs. For the walk-through the bomb bay doors were open and we could see the pavement below. I’m not sure my grandson fully understood how the bombing worked. 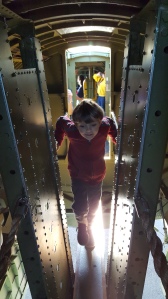 In the rear of the B-17 we saw the radio room, the top of the ball turret and the positions of the two waist gunners. In this model the gunners were staggered so they wouldn’t bump into each other while firing at attacking fighters. The 50 caliber machine guns were mounted in place with the belts loaded with bullets. Very realistic.

Outside we walked around, inspecting the tail gun from the rear of the plane. We saw the ball turret hanging down from the belly of the plane. With it open we could see how small the space was for the gunner to sit. Definitely had to be a smaller airman.

The stop in Jacksonville was the first on the Liberty Foundation’s 2020 tour. Visit their website at https://www.libertyfoundation.org/schedule  to see the schedule. If they are in your area you should definitely go see the vintage airplanes. If you can afford it, I highly recommend taking a ride. It is an unforgettable experience. 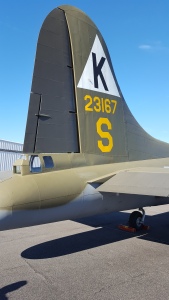 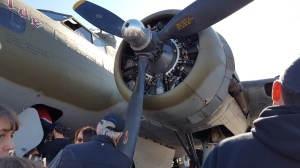