Years ago I was researching the idea of writing a novel about a French war bride from World War II. (A war bride is a woman who marries a soldier stationed overseas during a war.) In looking for memoirs I found most were written by English war brides. This made sense since the majority of foreign brides were from Great Britain where American troops were stationed for a number of years. The Americans landed in France in June 1944 so there was less time for the soldiers and the local French women to get to know each other.

I came across a book called “Des Amours de GI’s” by Hilary Kaiser published in 2004. Unfortunately this book was only available in French. I took French in high school and in college so I thought, “How hard could it be to translate this book?” I ordered “Des Amours de GI’s” and, when it came, I got out my French-English dictionary and went to work.

Needless to say, the translation went slowly, very slowly. What kept me going was my fascination with the content. Oral histories of French women who married American men in uniform filled the pages. Some of the stories went back to World War I but most were about relationships from World War II.

Thankfully, in 2007, Hilary Kaiser’s book was translated into English and made available as “French War Brides in America.” By this time I had translated less than half the French version. I gladly abandoned my translation exercise and read it in English. The same book has since been re-released in English both in paperback and 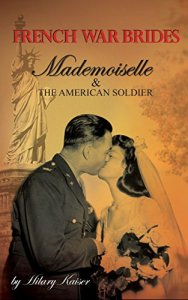 e-book with the title “French War Brides: Mademoiselle and the American Soldier.”

I did write a novel about a French girl and an American soldier who fell in love and married. The book has never been published but I still love the story…so maybe…someday…