I am always on the lookout for information related to the 276th Armored Field Artillery Battalion in which my father-in-law served during WWII. Recently I purchased two books about the M7 “Priest,” the mobile 105 mm Howitzer artillery piece utilized by the 276th AFA as well as by numerous other similar U.S. and British units. The British first called it “Priest” because the rounded machine gun mount resembled a pulpit.

“Images of War M7 Priest” contains over 200 photos of the M7, most in black & white and some in color. Descriptions accompany each picture and, in the combat photos, identify the unit in which the M7 served. On page 96 there is a photo of  soldiers of Battery C of the 276th AFA replacing the track on their M7. Although my father-in-law served in Battery A, it is exciting to see Battery C of the 276th represented in this book.

The book also provides various types of information about the M7. Discussions include its original concept at the beginning of WWII to the companies who designed and manufactured it.  Data on the different models and the number of each produced by which company is included as well as details on what was changed on each model. Technical data on the M7, on the Howitzer and on the organization of a typical battery is included in the appendix.

Photos show the M7 in different settings. There are training photos and pictures from North Africa where the British were the first to use it. The gun proved so effective it was used in Italy, in the invasion of France and the push across Europe to Germany. It was also used in the Philippines. Later the M7 saw service in Korea. 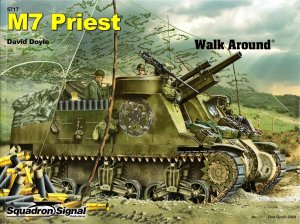 I also purchased a second book by David Doyle, “M7 Priest Walk Around.” This book provides detailed photos and explanations of many aspects of three different models of the M7. There are pictures of things like the tail lights, sprockets, idler brackets and ammo storage. Closeups of the driver’s position, various views of the Howitzer from the gunner’s viewpoint, the panoramic telescope for sighting the targets and numerous views from inside the fighting compartment fuel the imagination as to what it would have been like to the men who manned this mobile artillery piece.

For you technical nuts there’s lots to see and read about in this compact volume. Most of the pictures are of M7’s in museums rather than in combat, but some photos were taken before and during WWII.