I usually write about World  War II, but this month I decided to veer away from my usual topics for something more current. On June 16 we attended the implosion of the cooling towers at St. Johns River Power Park where we used to work. My husband and I both retired from SJRPP after working there over 20 years. JEA, co-owner with FPL, invited the retirees to attend the implosion as VIP’s. It was quite and experience. Very sad but also thrilling to see, especially up close where we were sitting.

These 464 ft. towers have been in place since the 1980’s cooling down the water used in two coal fired boilers so that the water could be recycled – water to steam to produce electricity, then steam back to water to be reused. They have been a familiar part of the skyline to everyone in the area. It only took 12 seconds for these huge concrete icons to come down.

I took a series of still photos. See below. 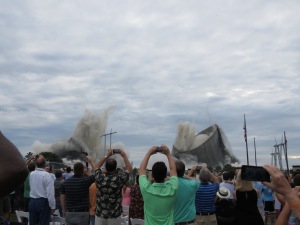 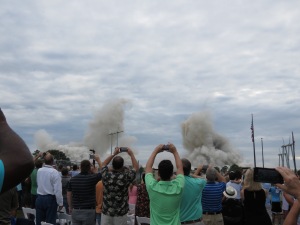