My husband and I recently traveled to Tennessee for a sad event – a family funeral. While driving through Tullahoma, we passed the Tullahoma Army National Guard Armory and out front sat an M-7 track-mounted 105 mm artillery piece like my father-in-law’s gun from WWII. Of course, we stopped and looked it over and took pictures.

This was only the second time we have seen an M-7, also called the “Priest,” in person and needless-to-say we were excited. We never imagined seeing my father-in-law’s gun so close to home. We quickly spread the word among the family members so that they too could share the experience. My father-in-law, Paul Whitaker, trained on the M-7 at Fort Campbell, Kentucky, then shipped out to Europe where he was in combat from July 1944 until the end of the war in Europe in May 1945.

Finding the gun in Tullahoma was ironic because in early 1944 my father-in-law’s outfit was taking part in the “Tennessee Maneuvers” in the Tullahoma/Coffee County area near Camp Forrest, Tennessee. They were pulled out of the maneuvers and sent to Fort Campbell where they were converted from a standard field artillery battalion to a mobile field artillery battalion. As part of the 276th Armored Field Artillery Battalion my father-in-law fought his way across Europe for the most part under the command of Patton’s Third Army.

Several years ago we saw an M-7 at a VFW near Flint, Michigan. We were visiting my sister and brother-in-law when he told us about seeing the gun at the VFW. He wasn’t sure if the gun was the same as my father-in-law’s gun so he took us out to see it.  That time my husband climbed up on top just to get a feel for what it was like up there. He didn’t attempt to climb aboard the one in Tullahoma. I’m afraid we’ve gotten too old for such adventures. Never-the-less we were both thrilled to see the gun. 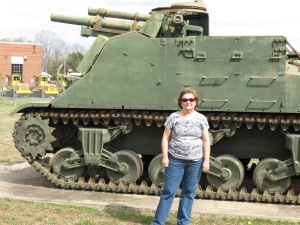 I have written about this gun and the 276th Armored Field Artillery Battalion several times before. If you are interested, check out my posts in the Category “276th AFA.”

One thought on “An M-7 “Priest” in Tullahoma”