We recently traveled to Savannah, Georgia, and decided to stop in at the Mighty Eighth Air Force Museum. It is right off I-95 at Pooler, Ga. I’d seen their website but wasn’t sure what to expect. Wow! Were we impressed!

The museum is housed in a beautiful facility that includes the extensive exhibits, research facilities, gift shop and a small cafe. The fees are extremely reasonable, especially since you could spend an entire day and not see all the exhibits. For anyone interested in World War II or in the history of the U. S. Air Force, this is the place to visit.

With the research that I have done on the WWII era for my novels, I probably knew more about the 8th Air Force than most visitors. Both my husband and I have always had an avid interest in the Second World War, the politics, the fighting, the men and women who fought, and those who stayed behind on the home front. We went from exhibit to exhibit looking at the artifacts and reading the explanations starting in the rotunda where busts of important 8th AF individuals  include Jimmy Stewart, the actor/movie star who piloted a B-24 on missions over Europe, and Jimmy Doolittle, who gained fame by leading the raid on Tokyo before taking command of the 8th.

The exhibits are set up so that the visitor is led through the war starting with the events that led up to the U.S. involvement. The origin of the 8th Bomber Command in January, 1942, just a month after the United States had declared war on Japan and Germany, at Hunter Field in Savannah, Ga., explains the museum’s location. In February, 1942, the 8th relocated to England where the English assigned them to air fields in southeastern England. Later, in February, 1944, the 8th was redesignated the 8th Air Force, still part of the Army Air Corp. The war would be over before the Air Force would separate from the Army as a separate entity.

In 1942 the 8th began flying missions over German occupied Europe. During the next three years the 8th would suffer more than 47,000 casualties, over 26,000 deaths and its men would be awarded numerous medals including seventeen Medals of Honor.

One of the most impressive exhibits is the B-17 bomber currently being restored named the City of Savannah. The plane takes up an enormous exhibition space. Although it is not open for visitors to climb aboard, just walking under its huge wings gave me goose-bumps. You can see the engines up close, read and watch videos of each crew members responsibilities, step inside a booth to experience the waist gunner’s position, and look in the ball turret to wonder how a grown man could fit in the small space. A B-24’s tail with its 50 caliber machine gun shows the cramped, awkward space occupied by the tail gunner.

I enjoyed sitting in the tent watching and hearing the crew briefings before they embarked on a bombing mission. The equipment, uniforms, various insignia and personal memorabilia of many of the squadrons, both bombers and fighters, were displayed in a series of glass cases. Another fascinating section was the replica of a German prison camp where 8th AF crews that had been shot down were held. Stories of evasion and escape as well as artifacts and pictures of those interred help the visitor understand the experiences of the prisoners.

I don’t want to give the impression that the 8th AF Museum only deals with World War II. Other exhibits tell of Korea, the Strategic Air Command and the conversion to jets. Additional exhibits honor the Tuskegee Airmen, the women of the WASP (Women’s Airforce Service Pilots), an art gallery and even the girl scouts.

Outside we found even more. A B-47 Stratojet sits beyond the grounds of the Memorial Garden. A replica of a British chapel provides a place for quiet reflection similar to that available to the men of the Mighty 8th while in England. Out front an F-4C Phantom Jet and a MIG 17-A stand guard. 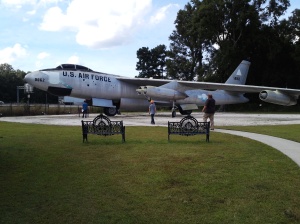 By the end of our allotted time my husband and I both agreed that we had to come back. We felt we had only skimmed the surface of the vast amount of information available. When we return we will be armed with the names of at least two WWII 8th AF veterans who lived in our home town. We will also plan to stay overnight in one of the nearby motels so that we can spend as much time as possible in the museum.

For anyone interested in World War II, the history of the Air Force or of aviation, this is a must-see museum.